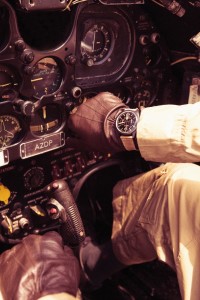 Timekeeping is one of the basic fundamentals of navigation and aviation watches was a necessity from the get go.

The pilot watch has evolved from a simple timepiece to an incredibly expensive and sophisticated instrument. Although the modern aircraft cockpit is not so reliant on a watch anymore the allure and appeal of these fine watches has not diminished at all.

The first aviation watch was born not long after the first flight by the Wright brothers.

In 1904 Brazilian aviator Alberto Santos-Dumont got a German Archdeacon Aviation Prize after his first flight. During the course of the celebration, he complained to his good friend Louise Cartier how hard it was to fly and keep track of time with a pocket watch.

Cartier sat down and not only designed the first aviation watch, but also one of the first wristwatches. The watch could be used for navigation, fuel burn and accurate time keeping. 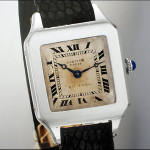 Cartier named the watch Santo after his friend.

The marketing of aviation watches followed soon after. When Louis Bleriot made his first flight across the English Channel he wore a Zenith on his wrist. After the successful flight, he mentioned to the media:

I am very satisfied with the Zenith watch, which I usually use, and I cannot recommend it too highly to people who are looking for precision.

When aircraft were used as a war machine in the First World War, aviation watches were used to synchronized attacks and navigation needed to be more precise. The accuracy of the watches improved a lot and a peculiar design was the big crown so that it could be hung in the cockpit and be part of the flight instrument, the “Cockpit” watch was born.

One of the first standard issue watches for British pilots were the Mark IV(A) and Mark V made by Doxa.

In 1929 Commander Philip Van Horn Weems in conjunction with Longines designed the Weems navigator’s watch. The watch had a rotating center second dial that could be adjusted during flight. Pilots could listen to radio frequency clocks and adjust the timepiece to ensure accuracy.

It was during WWII when the iconic pilot watch was born. Germany’s Reichs-Luftfahrtministerium wanted a standard watch for their bomber crews. A design was picked, called the Beobachtungs-uhren (Observation watches) and 5 companies were asked to manufacture them. These companies were A. Lange & Sohne, International Watch Company (IWC), Laco, Stowa and Wempe and almost 1200 of these B-uhr watches where made. Pilots had to return the watches after each flight.

The B-uhr watches had large casing to accommodate the larger and more accurate pocket watch movement and had a iron inner core to avoid magnetism problems. A large strap was also common so that it could be worn over bulky flight jackets. It was also the B-uhr watches that started the trend of the triangular marker and 2 dots as the 12 o clock position.

Another feature that was born during wartime was the use of tritium tubes on the watch. Tritium being a radioactive isotope is luminous in the dark and will illuminate the dial for 20 years.

During the cold war space exploration was developing rapidly and timepiece had to keep up the pace so to speak.

Nasa used Bulova electronic clocks on their first missions, but astronauts were also pilots and still used their own aviator watches. Rumour has it that Yuri Gagarin wore a Sturmanskie and Scott Carpenter a Breitling Navitimer.

The prize for the astronaut watch goes to Omega thought. 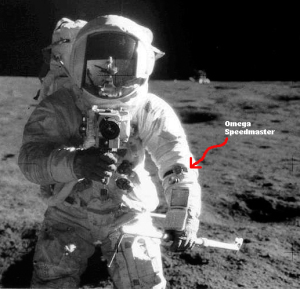 The Omega Speedmaster was the only aviation watch that could fulfil all NASA requirements and was picked as the watch that went to the moon. It was also during this time that digital watches was born and with the introduction of quartz movements (very accurate) these watches become very popular as pilot watches.

What to look for in an Aviator Watch:

Ask to pilots what is the best aviator watch and you will probable get three opinions. Most good pilot watches share some common traits that are worth considering, below is some of the highest recommended aviator watches:

Digital watches do not have the same appeal as that stylish analogue, but if you are looking for a pure aviator it’s hard to argue the fact that they are more practical.

Looking at a digital you will be able to tell the time precisely at a glance and they tend to have more functions. Digital watches also tend to cost less than their analogue counterparts for similar quality. Many air force pilots are seen sporting a G-Shock or Suunto Core.

Although not essential it will be foolish to buy an aviation watch without a chronograph (stopwatch). Chronographs are great for navigation and flying tricky approaches or to work out your fuel burn.

Aviation times are measured in GMT (Zulu Time). If pilots cover different time zones or need to give times in Zulu, having a watch that has a GMT hand is great. Rolex was one of the first watch manufacturers that incorporated this function with the Roles GMT Master, which was the standard issue for all Pan Am pilots for a long time.

Seeing that aviator watches tend to be larger, the glass is bigger and is more susceptible to scratching. The main three materials for the glass are:

Plastic: Is the cheapest option and are found in budget watches. Plastic is more flexible than glass and rarely cracks, but are way more susceptible to scratches

Sapphire: Sapphire is extremely hard and almost completely scratch resisted. Although more prone to cracks, due to its high quality it takes a savage knock to crack it though.

Many aviator watches are branded with a rotating bezel with a flight computer on it. These flight computers (also called an E6B flight computer) are nothing more than a slide ruler. Before the development of the modern cockpit with all its electronics, pilots would not leave home without the flight computer. It was used to work out groundspeed, fuel burn, cross wind and about a thousand other uses.

However the modern cockpit made it obsolete and some might say you can use it in a case of emergency. The truth is the markings are so small that it’s almost of no use and I still have to meet the pilot that actually used one of these flight computers on their watch.

It also makes the watch dial look very busy and difficult to read. On a dark night and turbulent cockpit you will appreciate an easy readable dial more than a useless, cluttered bezel. If you like to know more about these flight computer read this article.

It really goes without saying that an aviation watch must be well illuminated. Digital watches must have a strong backlight and an analogue must have a good dollop of tritium to illuminate the dials.

The options are as endless as your pockets are deep for aviator watches. Many high-end watch manufactures have branded their top watches as pilot watches but there are some great buys.

Sign up to get the latest watch reviews in your inbox